Brexit and the Location of Migrants

The results of the recent vote to leave the EU have come with a plethora of cross-sectional and spatial analyses, provided by the different British media outlets and their data journalists since Friday morning. We have learned about the generational profile of voters, the poor results of the stay campaign on traditional labour strongholds, the wide difference between results in large cities and small towns. While it is often hard to give a clear interpretation to these correlations, it is natural that we build our narratives and explanations of what happened on Friday with these elements.

I found one pattern particularly striking, the apparent negative correlation between the fraction of not born in the UK and the leave vote share. This correlation is depicted (once again) in Figure 1 for districts in England and Wales only. You can surely find it elsewhere (for example, here). 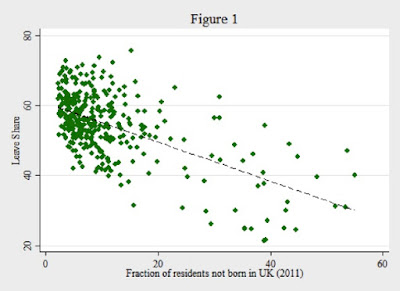 What is remarkable about this correlation in particular is that it seems to contradict the notion that the Leave vote was largely motivated by concerns about migration, symbolized in the claim that leaving would allow the UK to “regain control of its borders”. If fears of excessive migration fuelled the leave vote, wouldn’t we expect a positive correlation in Figure 1?

Of course, several candidate explanations for the observed negative relationship are available. Migrants may have sorted into more migrant-friendly areas. Or anti-immigration voters may harbour that position precisely because they are not acquainted with migrants. Or maybe a large fraction of the foreign born population had already acquired British citizenship and disproportionately voted to stay. Still, the robust negative correlation seems surprising in light of the centrality the debate about migration occupied during the campaign.

The apparent paradox is at least partly dispelled if we look at changes rather than the levels in the fraction of migrants. When we turn to the proportional change in the fraction of residents not born in the UK in the 2001-2011 inter-censal period, things start to align with anecdotes indicating that migration was indeed a key element leading to the Leave victory. Figure 2 shows this correlation for districts in England and Wales. We see that the correlation is now positive, indicating that places that experienced a larger relative increase in migration between 2001 and 2011 disproportionately supported the leaving the EU. 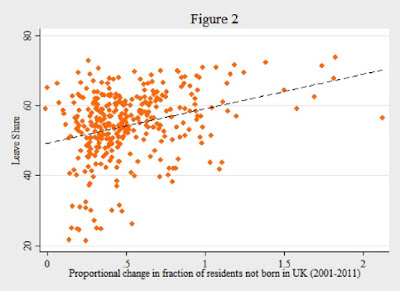 I will not make causal claims on this correlation, I know better. But if you wanted to argue that the leave vote was driven by concerns about migration, and felt perplexed about the widely circulated negative correlation in Figure 1, then the second figure may help understand things a little bit better.

Technical note: Both correlations are robust to excluding London. I have also estimated a regression of the Leave vote share at the district level on the fraction of migrants in 2011 while controlling for the fraction of migrants in 2001. The coefficient on the first variable is positive while the coefficient on the second is negative, with both being statistically significant. Results are robust to including region fixed effects and flexibly controlling for population. For a rigorous analysis of the effect of immigration on voting behaviour by residents, see for example the work in Barone et al. (2016) for Italy, which carefully explores the causal links at play. Remarkably, they do not find an electoral response to migration in large cities.