The National Housing and Planning Advice Unit advises the government on housing provision and affordability (house prices to income). A couple of days ago, it published a note on how revised population projections might affect its supply advice to the government.

The answer, in short, is "not much". This partly reflects the fact that NHPAU were already using relatively cautious figures. But even if they had not been, the answer would have been fairly similar. Why? Because as my colleague Paul Cheshire argues in a recent SERC policy paper evidence suggests that 'the overwhelmingly more important driver of the demand for housing is not household numbers: it is rising real incomes.'

In addition, to the extent that household numbers do matter, the planning system is somewhat responsive to projected increases in housing numbers. Unfortunately, historically, it has been completely unresponsive to house prices (this may surprise some) and hence ignores effects from rising real incomes. NHPAU is the government's vehicle for trying to address this problem but it is unclear whether it can be successful. Local Authorities still face few incentives to allow development and use a planning framework that ignores the role of real incomes in driving demand for housing.
Posted by Prof Henry G. Overman on Thursday, November 26, 2009 No comments:

Just to clarify, in my post earlier this week I was talking about Birmingham, England not Birmingham, Alabama. It appears that muddling the two is an easy mistake to make.

I gave a talk at the San Francisco Federal Reserve Bank yesterday and something that came up concerned the impact of land use controls on fluctuations in prices. Conventional wisdom is that more restrictive supply leads to greater price fluctuations. So, if you take San Fran (with very restrictive land use) and compare it to Columbus OH (with plenty of open land) you see price fluctuations around trend that are far more marked for San Fran. 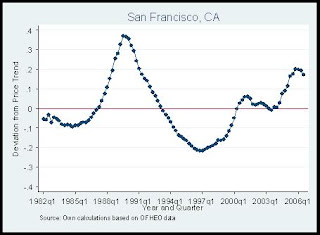 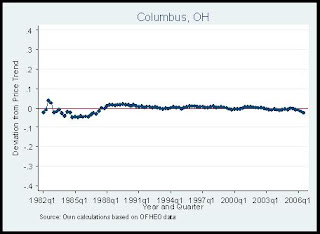 But some of the highest price falls in the US have been seen in places (like Las Vegas) that have seen huge building booms. Presumably this is because housing supply is inelastic once houses are built (unless you knock them down again) but I am not totally clear why this should have lead to larger house price falls in those markets (unless speculative demand played more of a role there than elsewhere and that component of demand has now collapsed).
[Thanks to Christian Hilber for the figures]
Posted by Prof Henry G. Overman on Thursday, November 19, 2009 No comments:

I am in San Francisco for work. I am reminded of research by my colleagues Paul Cheshire and Christian Hilber that reports that commercial rents in Birmingham are twice those in San Francisco (mostly because Birmingham's planning restrictions are more restrictive than San Francisco - itself a highly regulated city for the US).

Rather than risk offending anyone, let me simply finish with a couple of pictures for you to compare and contrast for yourselves. 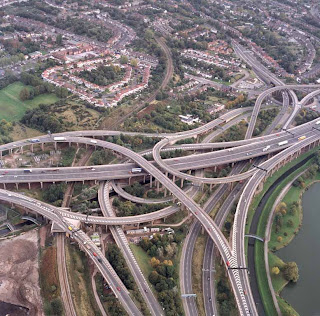 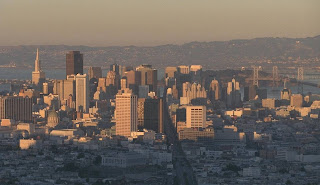 We launched our research for the NW on links between Manchester and Leeds yesterday.

The research finds that closer integration between Manchester and Leeds could bring economic benefits to much of the North. However, any impact would depend on changes in the industrial structure and in the composition and skills levels of the population. My worry is that such changes may be mostly compositional (i.e higher educated workers moving in to the two cities) in which case existing residents who don't up-skill could actually be worse off (because rising average incomes might drive up e.g. house prices).

That worry brings us back, yet again, to the question of whether people or places are the most crucial objective for policy. For some policy makers raising average incomes in the North is a suitable objective even if that just comes from moving already better paid workers around. As I have said before, I think the main focus should be on directly helping the disadvantaged.

But if you are someone who believes in helping places per se, focusing on relatively successful places within less successful regions at least has the advantage that you are working more with market forces than against it. Manchester and Leeds certainly meet those criteria so focusing interventions on improving the performance of those two economies may not be such a bad thing, conditional on existing government objectives.
Posted by Prof Henry G. Overman on Thursday, November 12, 2009 No comments:

Having got terribly confused the last time housing numbers were discussed it was nice to see so much data being presented by CLG on projects funded through Kickstart.

Once again, however, the amounts of expenditure involved for relatively modest amounts of house building convince me that government intervention of this kind is not a long run fix for the underlying problems of high house prices and poor supply responses.
Posted by Prof Henry G. Overman on Tuesday, November 10, 2009 No comments: