Offshoring and the geography of British jobs


Offshoring has risen in all advanced economies in recent years. This column analyses the impact of offshoring trends in the UK, where offshoring in services has followed the abundant offshoring in manufacturing, by uncovering their spatial implications. The impact of offshoring in places more exposed to such trends has been significantly negative on routine occupations. On the other hand, when investment abroad targeted developing economies, the effect on job creation in non-routine occupations was positive. Offshoring trends and their implications Complaints and opposition to offshoring deals by multinational enterprises (MNEs) have risen in all advanced economies in recent years. Offshoring trends, especially towards lower-wage developing and emerging countries, have been brought under the spotlight as being responsible for the destruction of low-skilled jobs and the progressive deterioration in the economic fortunes of domestic employees at the bottom of the employment ladder. During the 2000s, analyses of newspaper articles on offshoring indicated that references to the subject increased steadily both in the US (e.g. Mankiw and Swagel 2004) and in the UK (e.g. Abramovsky et al. 2004).

Fears about job losses have been traditionally centred on manufacturing. However, recent data show that services – as they become more easily tradeable due to improvements in technology – may be subject to similar trends. Examples of such drifts abound. In 2006, Barclays Bank was the first UK bank to negotiate a framework with the unions over the outsourcing of jobs to low-cost countries. More recently, it was again a media target as a result of moving hundreds of back-office jobs to India. Other firms, such as Adecco (a UK labour recruiting agency) and British Airways, are among a growing number of British companies that have opened offices and/or call centres in developing economies, often facing the wrath of public opinion.

The implications associated to offshoring trends, especially with respect to their labour market impact in the home economy of the multinational enterprise, have also become a popular topic in the academic debate. However, most of the existing evidence has pointed to an overall modest impact of offshoring (e.g. Grossman and Rossi-Hansberg 2006, Robert-Nicoud 2008, Amiti and Wei 2009, Barba Navaretti et al. 2010). Countries relocating low value-added, routine activities abroad and retaining higher value-added activities at home are expected to gain from the rationalisation of their value chain, as job losses in routine occupations may be more than offset by new jobs in non-routine occupations.

Our work rests on the assumption that the distribution of benefits and costs across geographical segments of the labour market and occupation typologies in the UK is shaped by changes in the industry composition of offshoring. Differences in the industry mix of local labour markets mean sectors vary in their exposure to international relocation of production activities in both manufacturing and service industries. The spatial implications associated to offshoring trends are of primary importance, since the same forces that are likely to spur international convergence – i.e. globalisation of production – may also seemingly prompt subnational polarisation and divergence. 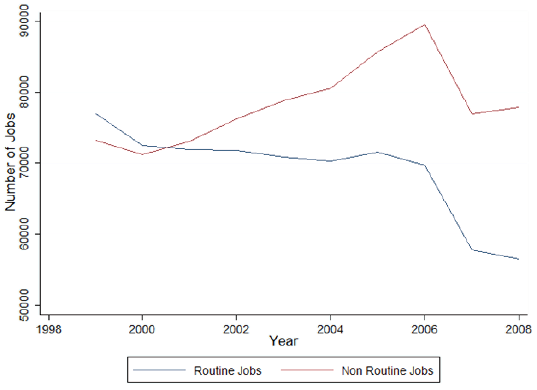 Our research has analysed the impact of offshoring trends by uncovering their spatial implications, a factor which was generally overlooked in previous analyses. The UK represents a particularly interesting case for analysing how offshoring alters job composition. 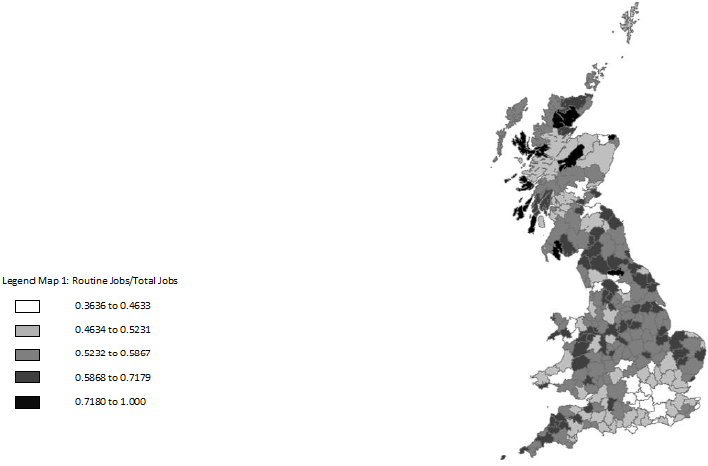 Figure 3. Spatial distribution of non-routine jobs across local labour markets (TTWAs) in in the UK, 1999 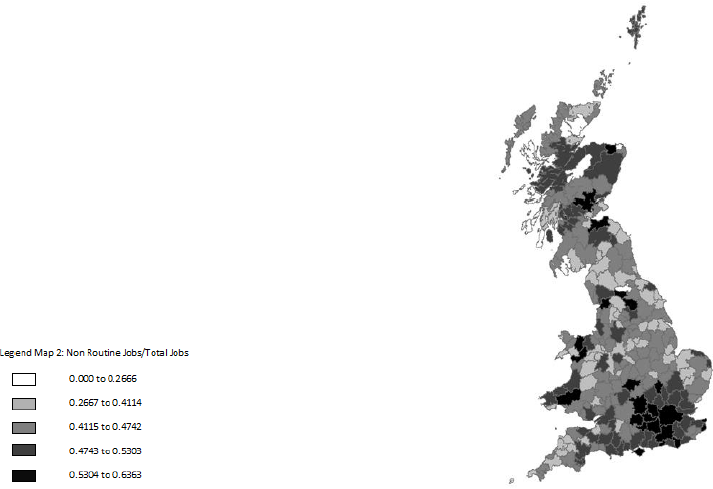 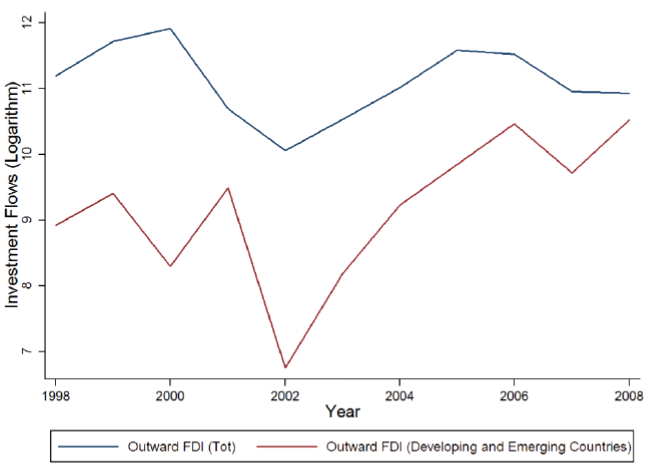 Offshoring trends between 1998 and 2007 had important distributional consequences at both the spatial and individual level. The impact of offshoring in places more exposed to such trends as a consequence of their pre-existing industry specialisation was significantly negative on routine occupations. Whereas job destruction of routine occupations took place regardless of whether the offshoring was directed towards developed or developing/emerging economies, job creation in non-routine occupations only happened when investment abroad targeted the latter. In addition, compensation effects of job creation in non-routine occupations were strengthened in the long term, once efficiency gains linked to the geographical rationalisation of production had been capitalised.

The results of our study have significant implications. Although efficiency gains coming from the geographical fragmentation of production activities may emerge, particularly over time, automatic compensation mechanisms acting through the increase in the demand of domestic skill intensity may not necessarily be able to eliminate the costs in the home economy. Specialisation following offshoring has in fact been mainly ‘functional’ within industry, rather than across the industry mix (e.g. Robert-Nicoud 2008, Crinò 2009). This implies that adjustments in industry structures within each local labour market may be rather slow.

Therefore, the consequences of offshoring are likely to be particularly severe in the short and medium term in specific areas with a high initial specialisation in routine activities. The extent to which such processes generate and reinforce hot spots of job market disadvantages for specific typologies of workers and in locations more exposed to offshoring trends has relevant distributional consequences.

The overall impact of offshoring thus poses important challenges to policy design and implementation. Initiatives targeting the mitigation of the negative consequences of offshoring are deemed necessary in regions characterised by greater risk of exposure to the relocation of production, and in these areas to specific categories of workers. Examples of these initiatives are income support schemes for specific vulnerable groups, coupled with both effective industrial policy interventions to reconvert and revitalise old industrial areas towards higher value added activities, and new approaches to training and skill upgrading programmes.


The Government is currently investing over £1 billion to provide superfast broadband to 95% of the UK by 2017. Both the European Union and the US have similarly ambitious plans to increase access to broadband services providing download speeds of 30Mbps or above. These investments are justified as having positive impacts on individuals and businesses, ranging from higher productivity to more flexible working schedules.

One important justification is that better broadband will improve educational attainment. Students of all ages spend a lot of time online, and online educational resources are increasingly popular (YouTube or Wikipedia, or more recently massive open online courses - MOOCs). However, the existing evidence on the impact of broadband is far from conclusive as it is hard to assess the causal impact of broadband on socio-economic outcomes. In our recent paper we combine a rich collection of microdata with an original empirical strategy to study whether better broadband improves educational attainment. However, despite government investment in this area we find improved broadband has no causal impact on pupils’ achievement.

In order to understand the relationship between ICT and educational achievement we set up a simple theoretical model that decomposes the effect into two mechanisms: the impact of ICT on study hours and the impact of ICT on study-hour productivity. On the one hand, reduced ICT costs could have a positive impact on learning productivity as, with faster connections, students can access more online educational content per unit of time (i.e. Wikipedia). On the other hand, students might decrease study hours by spending more time online on other activities (i.e. Facebook). The net effect is unclear.

To test between these two hypotheses - Facebook or Wikipedia - we use English microdata that allows us to link administrative test scores for the population of primary and secondary school student to the available ICT at their home addresses. We focus on the impact of ICT on standardised (Key-Stage) tests scores for English pupils aged 7 to 16 years old during the period 2002-2008. To causally estimate the impact, we exploit a well-known feature of DSL-broadband technology – that the length of the copper wire that connects residences to the local exchange station is a key determinant of the available internet connection speeds. Capacity constraints at the individual telephone exchange stations lead to invisible and essentially randomly placed boundaries of station-level catchment areas that in turn give rise to substantial and discontinuous jumps in the available ICT across neighboring residences. Variation in available broadband speed stems from jumps in the length of the copper wire that connects residences to their assigned exchange station on the slower side (longer distances to connected exchange) relative to the faster side (shorter distances to connected exchange) of a given boundary segment. We exploit this feature across more than 20,000 boundaries in England in a spatial regression discontinuity (RD) design.

The jump in available ICT across exchange station boundaries is substantial. The average difference in residential distances to their connected exchange station between neighboring residences on different sides of the boundary is 725 meters, 2,250 meters when restricting the estimation to the top third of boundary segments with the largest mean difference in connection distances. These discontinuous jumps in copper wire connection lengths translate into substantial differences in the available ICT across space. We find that the average jump in the time cost of accessing a given amount of online content rises by 22 percent when moving from the slow side of a boundary segment to the faster side of the invisible boundary (47 percent for the top third).

When turning to the effect of available internet speed on test scores, our estimates suggest that even very large changes in the available internet connection speeds have a precisely estimated zero effect on educational attainment. Our robustness checks show that the estimates are causally identified: house prices, student socioeconomic characteristics and access to local (dis-)amenities are unaffected by the boundaries. Using the additional microdata on student time use and internet use to quantify the channels underlying this zero overall effect, we find that jumps in the available ICT have no significant effect on student time spent studying online or offline, or on their study productivity.

Access to fast broadband has been claimed as important for educational success, and the lack of such connections identified as a drawback for the development of rural communities. Our research suggests a less negative scenario. Given the amount of funds committed and the bold claims made about superfast broadband investment, more robust evidence is urgently needed. Some of the future work of the CEP Urbanisation Programme will focus on providing such evidence. So get off Facebook, and watch this space.
Posted by Unknown on Thursday, November 05, 2015