Areas experiencing poor economic performance are often targeted by governments with programmes aimed at improving employment. However, there are concerns that any increases in employment come at the cost of reduced employment elsewhere. This column examines the displacement effects of one such programme in the UK. While employment increased within the targeted areas, there were comparable decreases in employment just outside the areas’ boundaries. These findings suggest place-based policies should focus on traded activities that are less susceptible to local displacement effects.

Governments around the world target large amounts of money at areas experiencing high unemployment and poor economic performance. In the EU, regional policy accounts for around 35% of total community spending. On top of this, many national governments run extensive programmes aiming to alleviate deprivation in the poorest areas. For example, in the US, Kline and Moretti (2014) have estimated that around $95 billion is spent annually on spatially targeted economic development programmes by federal and state governments.

There’s little doubt among economists that well-designed support programmes can increase employment in supported parts of the economy. However, the worry is that these improvements may come at a cost of reduced employment in the unsupported parts of the economy. Unsupported businesses may well suffer from the assistance provided to their government-supported competitors. This has long been a particular concern with spatially targeted policies that provide support to firms in some areas, but not others. What if these policies simply shuffle employment from one area to another? If that shuffling occurs at large scales (say from the South to the North of England) then this may be consistent with government policy objectives. But what if, instead, any displacement happens at small spatial scales? If that’s the case, governments may be spending considerable sums of money to achieve little additional employment at either national or local level. Add to that the potentially large inefficiency losses due to higher tax burdens (often considered to be around 40%) and in the worst case scenario spatially targeted interventions may even cause significant net welfare losses.

While these concerns over adverse displacement effects are long standing, there is little causal evidence on whether they occur in practice. A number of recent studies have begun to address this gap in our understanding of the effect of these policies. For example, in their 2013 study of a French active labour market programme implemented using a large-scale field experiment, Crépon and co-authors (2013) showed that supporting unemployed job seekers increases their likelihood of finding a job, but at the same time reduces the employment prospects of unsupported job seekers in the same local labour market. In another study, Hanson and Rohlin (2013) looked at areas just outside successful Enterprise Zones (a US policy targeted at encouraging enterprise in declining areas) and compared them to areas just outside unsuccessful zones, finding substantial evidence of displacement (areas just outside unsuccessful zones do relatively better because they don't experience the displacement). In contrast, Ham et al (2011) find no evidence of displacement effects for three US place-based programmes when comparing a set of nearest ineligible Census Tracts (contiguous to the treatment area) to a set of second nearest ineligible Census Tracts.

In a recent study, we add to the available evidence by looking at local displacement effects with the help of extremely fine spatial data on employment and businesses in the UK. We examined spillover effects in local markets at the boundaries of areas supported by the Local Enterprise Growth Initiative (LEGI) – a UK programme that targeted deprived areas in 2006-2011. We observed that the programme increased employment on the LEGI-side of the treatment area boundary, but this came at the cost of comparable employment losses in untreated localities just on the other side of the boundary. The data also suggested that these effects vanish quickly when moving away from the LEGI boundary, pointing towards displacement in local markets. Moreover, none of these effects persist after the programme was abolished in 2011. Figure 1 provides a graphical presentation of our results. It shows growth rates for employment within 1km-wide bands constructed based on the distance from the nearest LEGI area boundary. The estimates are based on employment data at a fine spatial scale and allow for differences in area characteristics as well as unobserved trends in employment in the neighbourhood of LEGI areas. The figure reveals a striking pattern of effects at the LEGI boundary, with the area just inside the boundary seeing employment gains, while the control area just outside the programme area suffered from employment losses. This pattern of results suggests significant displacement of employment in a small neighbourhood around the LEGI boundary. When looking at unemployment, we find no displacement effects, which is unsurprising given that workers are free to cross the LEGI boundary and the programme appears to deliver no net job creation.

Figure 1. Displacement of employment at the LEGI boundary 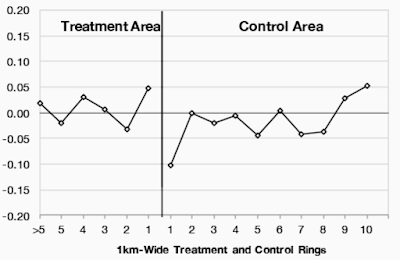 Notes: Difference-in-difference estimates by 1km-wide control and treatment rings from column 2, table 4 Elias and Overman (2016). The outcome is the log change in employment from 2004 to 2009.

Because similar businesses that are located close to each other often compete in the same local product or service markets, displacement effects at the boundary of the programme area are not unexpected. On the contrary, they are predicted by theory – hence the concerns of many economists about the impact of such spatially targeted programmes.

The bottom line from our results is that LEGI did little to increase employment in the most deprived areas of England. The direct impacts of the intervention on the target area is simply attenuated by loses elsewhere in the local economy. Although we are unable to identify these spillover effects at a wider spatial scale (national or global, for example), our study makes an important contribution to the debate by showing that such effects seem to be at play at small spatial scales, within local markets. Moreover, our findings support the view that even relatively large place-based interventions may struggle to ‘transform’ the local economy (given that even the displacement effects do not persist post-funding).

Our findings are especially worrying for area-based programmes that aim to help economically disadvantaged areas because the neighbouring areas that suffer from negative displacement effects tend also to be among the most deprived (given that deprivation is persistent across space). Fortunately, there are things we can do that may reduce the amount of local displacement. For example, LEGI tended to target non-traded services for which the local market is fixed in size. This is precisely the kind of situation in which we would expect displacement to occur. To give a specific example – as one hairdresser expands, it’s pretty likely that business at neighbouring hairdressers is going to be negatively affected because most people simply do not travel long distances to get their haircut.

In contrast, supporting traded activities is less likely to lead to local displacement because the business stealing effect will hit firms located elsewhere in the economy (or even abroad). Consistent with this, research by Criscuolo et al suggests that the UK Regional Selective Assistance programme (which only provides support to firms that do not serve local markets) does appear to generate additional employment that is not simply the result of displacement from nearby areas (resulting in an overall increase in local employment).

So we can do better. But reforming these programmes requires policy makers to take concerns over displacement seriously. Better evidence is, hopefully, one way that we can convince them to do so.