A guest post by Stephen Clarke of the Resolution Foundation


2017 will see the UK begin its departure from the European Union. However, as the UK seeks to shed some politicians in Brussels, we will be getting some new ones at home. Greater Manchester, Liverpool, Tees, West Midlands, Bristol and Bath, and Cambridgeshire and Peterborough will all go to the polls to elect mayors and will gain new powers over transport, housing, business support and skills.

Unfortunately last week it was reported that the Sheffield City Region would miss out. That’s a concern as new research by the Resolution Foundation shows that the area has some pretty fundamental living standards challenges that need to be addressed. Our analysis find that the city region is the low pay capital of Britain – with typical workers earn £43 less a week than the UK average. The region desperately needs to get devolution back on track.

Sheffield may be the low pay capital, but the problem of low pay affects the vast majority of cities in the Midlands and the North of Britain. It is well known that country’s economy is skewed towards London and the South East but the chart below emphasises this. Gross hourly pay was 36 per cent higher in inner London compared to the UK average between 2012 and 2016, whereas it was 13 per cent below the average in the Sheffield City Region. 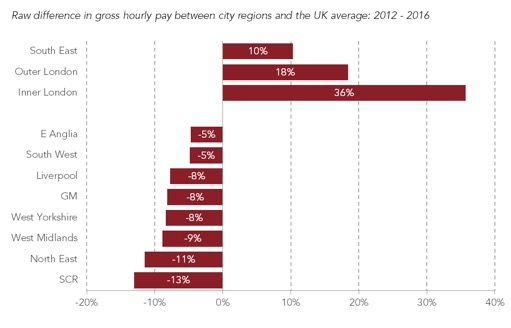 Note: Difference in gross hourly pay is calculated as an average of the years 2012-2016 using data from the Labour Force Survey. Multiple years were rolled together to provide enough observations to estimate the differential in a regression model. East Anglia and South West contain the devolved areas of Bristol and Bath and Cambridge and Peterborough.

What accounts for the pay penalty experienced by Sheffield and other areas outside of the South East? Partly it reflects the fact that these areas tend to have a greater proportion of employees who are paid less (part-time workers, those on Zero Hours Contracts, etc) and a greater share of firms that pay less (those in the retail and hospitality sectors for instance). However it is also true that like-for-like workers earn less in these areas than in the rest of the country. In essence there is both a compositional and a productivity problem.

To estimate how important each of these factors are we ran a series of regression models in which we estimate the difference in gross hourly pay between workers in these areas and those in the rest of the UK controlling for a range of job, workplace and personal characteristics. We find that in all the areas above pay gaps remain even when we compare like-for-like workers. This ‘residual’ reflects differences in productivity and other factors that we cannot directly measure. The relative importance of the two factors is given for each region in the chart below. 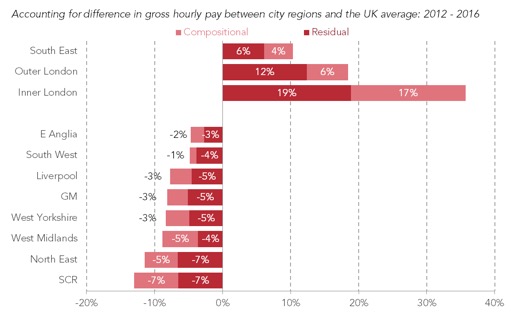 Note: Analysis carried out using the Labour Force Survey, full details of models can be found in Annex 3 of our paper, available here.

In all areas compositional and residual factors play a part, however there are differences in the relative importance of the two. Outer London does have more high paying firms and higher paid employees, but higher productivity seems to play a bigger role in this area. In Sheffield, compositional differences and lower productivity each play an equal part. 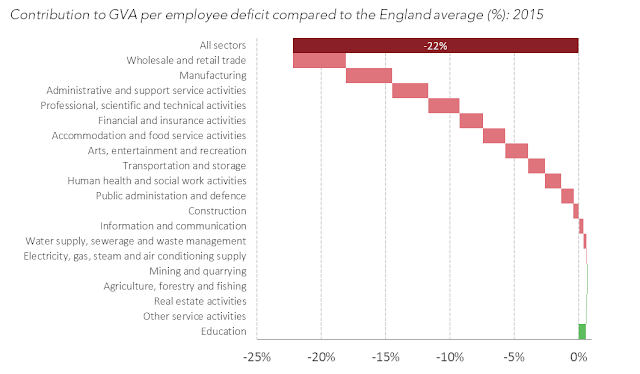 The retail, manufacturing and office admin sectors are all large employers in the region and correspondingly all significantly contribute to the region’s productivity deficit. Education is the only sector that meaningfully raises the productivity of the region compared to the rest of England.

The scale of the challenge facing the South Yorkshire region is clear. This challenge is just as much a task for national politicians as it is one for local leaders. Nevertheless devolution would have bolstered the chances of local leaders starting to get to grips with it. Despite the limited powers on offer, devolution does provide greater control over how the scarce resources available for economic support are spent. An effective mayor also provides a figurehead who can convene large employers and key businesses. Changes to transport and housing can make an area more attractive to firms and high skilled workers.

It remains to be seen if the six regions that are going to the polls this May will use these new powers effectively. What is certain is that South Yorkshire will not – yet – get the chance to.
Posted by Unknown on Friday, January 20, 2017