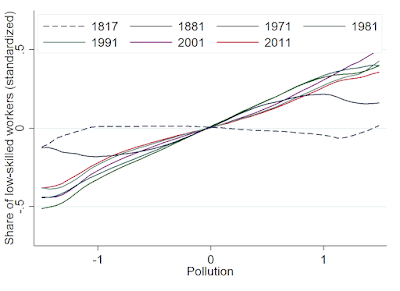 Could these findings inform policies today? First, there are large environmental disamenities in cities of developed economies, and even more pressing challenges in the cities of developing economies. In both cases, disamenities may be unequally spread within cities. The East Side Story shows that any such spatial inequality may anchor neighbourhoods in a persistent equilibrium, and there may be large costs associated with long-term spatial inequalities. Second, many developed economies employ costly urban policies to revive deprived areas, triggering new housing opportunities and business investment. Our findings indicate the importance of a sizable push to bring a neighbourhood past a certain threshold.
Posted by Unknown on Monday, May 22, 2017