Do we value the London Congestion Charge?


It may have gone unnoticed to many, but the London Assembly recently sought ideas on how to tackle congestion in the capital. One of the submissions from the London Chamber of Commerce and Industry (LCCI) calls for a radical rethink on the congestion charge and questions whether it is serving the purpose for which it was intended.

Although, contrary to some media reports, the LCCI submission does not advocate ‘ripping up’ the congestion charge, any hint of of removing the one congestion pricing system that has been successfully implemented in the UK will cause dismay amongst most economists. Congestion charging is, at least theoretically, an economically optimal way to reduce congestion, even if implementation can be practically and politically challenging. Greater use of road pricing was one of the policies advocated by the recent LSE Growth Commission report on transport infrastructure.

Of course there are many debates about how effective the London congestion charge has been in reducing congestion and at increasing the wellbeing of the capital’s residents. Surprisingly though, there is little rigorous empirical evidence on the question.

My recent research on the congestion charge addresses this gap by estimating the impact of the introduction of the charge and subsequent price hikes on traffic flows, and the consequent effects this had on house prices in the area – house prices being a useful metric of how much residents value the changes.

The headline finding is that the original congestion charge and the short-lived Western Extension reduced traffic. Homeowners valued these better traffic conditions in the western extension of the zone, where prices rose by around 4% when the congestion charge was implemented.


On the 17th of February 2003, London introduced the Congestion Charge Zone (CCZ) in Central London. A flat fee of £5.00 was levied on commuters driving into the zone between 7:00am to 6:30pm from Monday to Friday, excluding public holidays. The demarcated charge zone covered a total of 21 square kilometres and encompassed the financial centre (Bank), parliament and government offices (Palace of Westminster), major shopping belts (Oxford Circus) and tourist attractions (Trafalgar Square, Westminster Abbey, Big Ben, St Paul Cathedral) (See Map below). These are areas with the heaviest traffic flow. The rationale for the charge is not only to mitigate traffic bottlenecks and improve traffic flow and commuting time, but also to generate revenues to improve the public transport system. 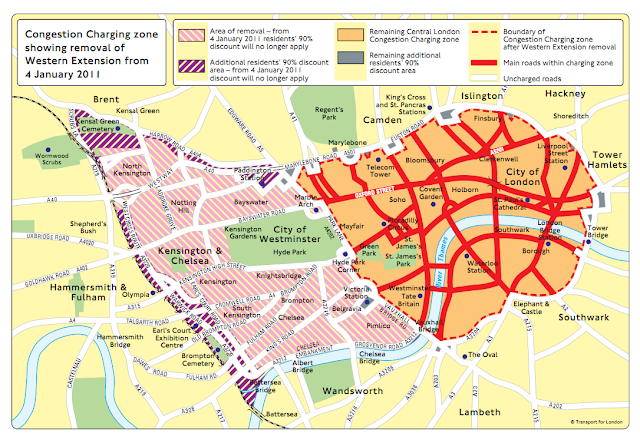 Effects of the London Congestion Charge


Is the charge effective? My research show that indeed it is. Relying on traffic data at a road level, I find that vehicular flow fell by 6% to 9% after the CC is first introduced in 2003, and 4% to 6% when the WEZ is implemented in 2007. Subsequent hikes, other than the initial increase in charge in 2005 (from £5.00 to £8.00), has a less discernible impact on traffic. This is understandable as marginal increases in the charge are less likely to dissuade drivers from commuting into the zone than its introduction. Commuters are now required to pay £11.50 to drive into the cordoned area when the CC is up. With less driving in the CCZ, air quality has also improved, according to others’ research. The implementation of the CC was associated with a 12 per cent reduction in air pollutants as such PM10 (Particulate Matter) and NO (Nitrogen Oxide) in the zone (Beevers et al. 2005). Roads are also much safer with a decline in accident and casualty counts (Green et al, 2016). The success of the original congestion charge led to the subsequent extension of the congestion charge zone to central west London (WEZ) in 2007 that covers Kensington and Chelsea borough - one of the most expensive and sought after estates in London.

How much do residents value these benefits?


So do homeowners pay for these benefits? To examine this, I restrict the analysis to properties very close to the congestion charge boundary (within 1 kilometre) to exploit the sharp discontinuity in traffic flow induced by the charge between roads just inside the zone and roads just outside (as drivers are deterred from driving into Central London). This ensures that properties in and out of the charged zone are almost similar other than being affected by the charge (or receiving the benefits from improved traffic conditions).

Comparing house price changes before and after the CC is implemented, my findings show that homeowners do pay for these benefits. When the WEZ was implemented, house prices rose by 4 per cent (about £30,000) relative to comparable transactions outside the zone. However, similar price increases did not occur in the original CCZ when it was introduced in 2003. There are several reasons for this. The initial introduction of the CC was not well-received by the residents. Many were unsure whether the charge was able to achieve its intended aims. Furthermore, based on census data, residents in the WEZ are more likely to own a car and drive more to work, stay further away from their workplace and earn much higher wages. All these factors could explain a larger willingness to pay to avoid traffic congestion.


My findings show the effectiveness of the congestion charge and that homeowners appreciate these benefits by paying more for homes in the zone. Despite the success associated with the charge, it still faces vehement opposition from the public, who perceive it is as an extra tax. As a result, few cities are able to implement the charge, despite high levels of congestion. Some exceptions include Singapore, Stockholm, Gothenburg, Milan and Dubai. Having said that, for the charge to achieve its intended aims, drivers must be provided with a reliable public transport system to induce them to switch from driving.