Are they Green *Belts* by Accident?


We Brits are a self-satisfied lot, and seem to assume that Green Belts are a splendid British invention and a wonderful boon to the world. A signal of our praiseworthy efforts to protect the green: whether the village green or the environment: never a signal of our nostalgic hankerings for a rural England which never existed.

In fact, the truth seems remote from this English foundational myth. The way in which Green Belts developed suggests they are only belts by accident and are certainly an imported idea. As part of the work for a London First report, I have recently been looking at how our Green Belts came into existence and how their purposes have been transformed in the process. It is an extraordinary story, and I have learnt substantially from Jonathan Manns' work.

In the 19th Century, many continental European cities were getting rid of their city walls: the development of the nation-state and mechanised warfare had rendered them functionally irrelevant. This was happening in Vienna in the late 1850s and the idea of a Ringstrasse park was proposed. Although Napoleon had twice shown that Vienna’s fortifications could not withstand a modern (early 19th Century) army, the conservative Austrian military withstood their demolition until 1857. The city walls had had an area around them kept clear for military purposes, so their demolition released a substantial circular ring of space around the city. Bourgeoisie civic-mindedness was just developing. The map shows what was proposed: a Green Belt if ever there was one! But only a belt by accident. It was on the space released by the city walls and not surprisingly city walls had a roughly circular shape. 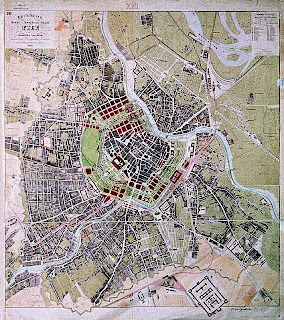 In the UK we also tend to link the idea of green belts to Ebenezer Howard’s proposals for Garden Cities.  Not so. The first British person to propose a Green Belt seems to have been Lord Meath – an Anglo-Irish public figure and philanthropist. He is an interesting character and, to put it mildly, very alien to modern sensibilities. Despite being an Alderman on the original LCC he believed in the fundamentally corrupting nature of cities – so far as possible, their size should be limited and rural-urban migration halted. He also believed cities ‘corrupted’ the gene pool of the British. He realised, however, that London was going to continue to grow: so his answer was to increase the supply of green spaces and recreation grounds in London and construct a ‘Green belt or girdle’. His other solution to the burgeoning urban population was state-sponsored emigration to the British Colonies: he was a strong Imperialist - indeed the founder of Empire Day, a public holiday to celebrate the British Empire wherever the sun never set.

Meath explicitly imported the idea from the Viennese proposal but his version of a green belt or girdle had much more in common with Howard’s later ideas for green belts around his Garden Cities of Tomorrow than it did with the modern Green Belt. Apart from the Viennese Ringstrasse park, Meath was influenced by his visits to the US and seeing early ‘beltways’ – wide avenues around major cities.  He envisaged such a broad avenue connecting public open spaces, some existing and some to be bought and dedicated to public use, encircling London.

An updating of his proposal as published in 1901 is illustrated below (and is taken from here). Much of the Meathian green belt was close to central London and all would have been within the GLA boundaries – mostly inside the inner boundaries of the modern Green Belt. 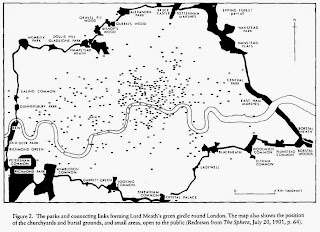 The idea was taken up by the London Society in1919 in its proposed Development Plan for Greater London. This was still a proposal for ‘green lungs’ for a smoky, dirty and highly congested London. Official adaptation came in 1935 when the old London County Council endorsed the idea. It was implemented in 1938 with the Green Belt (London and Home Counties) Act. This empowered local authorities to buy land for public use.  By the late 1940s 20,000 hectares of land had been bought around London dedicated as public open space.

In the immediate post-WWII period of reconstruction under the Atlee government, Green Belts were provided for all major cities that wanted them under the Town and Country Planning Act of 1947. But this did not propose buying land. The Act – still the basis for our planning system - expropriated ‘development rights’ from freehold land ownership. So in effect it gave power to local governments to prevent urban development on as yet undeveloped land. It did not give rights of public access or generate any change in ownership. Privately-owned land, if designated as Green Belt, would remain private. So, while still promoted in the name of green space, in practice the Green Belt provisions in the 1947 Act just stopped anything happening – rather than creating valued recreational or open spaces.

Although the 1947 Act provided for Green Belts, however, it did not implement them. That the 1947 Act was a creation of the Atlee government gives the Labour Party a sense of ownership of the idea but the implementation was under a Conservative Housing Minister, Duncan Sandys, in 1955. And the purposes by now had totally changed – both in aspiration and in reality. No more were Green Belts to be green lungs or recreational space; they were just to stop development.

As the Minister wrote: “even if…neither green nor particularly attractive scenically, the major function of the Greenbelt was…to stop further urban development”.  That remains their function as confirmed in the National Planning Policy Framework of 2012. Their purpose was to be empty spaces between cities, to protect the Home Counties from the encroachment of London and force urban expansion to jump over Surrey or Hertfordshire to Northants, Cambridgeshire or Hampshire.

In the early 20th Century the Californians tried to apply zoning to confine Chinese minorities to particular neighbourhoods and later, in Louisville, Kentucky, zoning ordinances were brought in to stop Blacks from buying houses in certain areas. This was deliberate discriminatory zoning designed to protect privileges and create new ghettoes. Such discriminatory zoning was struck down by the Supreme Court in 1917, but the right to zone in a non-discriminatory way was permitted in a judgement of 1926. Local communities in the US soon found a way of keeping ‘undesirables’ out: they zoned for single family homes only and on large plots. Over time plots became ever larger and what is now euphemistically known as ‘minimum lot size’ requirements became pervasive.

It is claimed, for example, that ‘the Bay Area is built-out’. And so it is in the sense that more or less all available zoned lots are developed. But look across the Golden Gate Bridge and you see Marin County just a mile or so from downtown San Francisco. Minimum lot sizes in many of the communities in Marin County are 60 acres! There are many prosperous communities in the mid-West and West of the US which have 10, 20 and even 50 acre minimum lot size requirements. This is very effective at keeping poor people out. It is exclusionary but is does not discriminate and so is legal. It also contributes significantly to the sprawl of US urban development.

Greenbelts, as implemented, have become a very British form of exclusionary zoning. They have the effect of confining the urban poor to live at high densities in the cities and preserving the Home Counties (and other similar green places near to all our other cities with Green Belts of their own) for the aspirant gentry who had got there earlier on the tracks of the suburban railway network; or as bohemian urban refugees establishing artistic colonies such as Eric Gill’s Piggotts or the Sussex retreats of the Bloomsbury Group. It seems to be a long-standing tradition of the privileged British to want to deny for others what they enjoy themselves. Particularly if they can do so while maintaining a stance of moral superiority, presenting themselves as protectors of the real interests of those whose desires they frustrate. Prominent members of the Bloomsbury Group, happily housed in England’s pleasant fields, were solid supporters of the early Council for the Preservation of the Rural England and J. M. Keynes contributed to Clough Williams-Ellis’s seminal 1928 anti-urban tract, Englandand the Octopus. Williams-Ellis himself, of course, built a tasteful Italianate Disneyland precursor on a beautiful estuary in North Wales. But he had taste so that, of course, was alright.

Thus the idea of Green Belts, the accidental innovation – aimed at adding green space to high-density ancient Vienna in place of the city walls, then adopted in unaltered form in England as an idea to improve urban life for all – has been transmuted into a protective device for the wealthy. If you really want to plan to protect and provide better access to green space and open countryside without artificially constraining land supply and forcing up house prices, then Green Fingers (or Green Wedges) would seem to be the best solution. That is what more egalitarian Scandinavians have. Copenhagen has its Green Fingers – really brown urbanisation along the radial routes out of the city with protected countryside each side. Denmark has not just got cheaper housing: according to the Dallas Fed’s data, the real house price has increased by a factor of 1.6 in Denmark compared to 3.4 in the UK since 1975 but new houses in Denmark are a lot bigger: 80% bigger in fact.

Now green wedges seem like a quite sensible idea.