How to roll out high speed broadband in Britain

Across the globe, governments are looking for ways to roll out reliable and fast internet access. Broadband is central to this ambition. For example, the European Commission’s ambition is that at least 50% of European households should have Internet connections above 100 Mbit/s by 2020. In the UK, the Coalition wants superfast broadband access for 95% of households by 2017, with a particular focus on cities. That’s drawn some flak from rural communities, many of whom exist on very slow connections.

To an economist, such officially defined targets imply that governments see significant externalities from broadband provision, and that if left to markets, too many households would be left in the slow lane. However, putting a number on these spillover benefits is very hard. In turn, that leaves it unclear whether publicly subsidized improvements in broadband infrastructure really are socially desirable.

I’ve just released this research, in which my co-authors Pantelis Koutroumpis and Tommaso Valletti and I try to quantify broadband’s benefits to households. We were particularly interested in the benefit users derive from internet usage above and beyond what they pay to their internet service provider (ISP). Measuring this ‘consumer surplus’, however, is difficult because we can’t directly observe what people would be willing to pay.

To get around this, we argue that it is possible to indirectly infer the consumer surplus from property prices. In the UK every property is connected to one and only one internet delivery point - the local exchange (LE). Actual broadband speed critically depends on the distance of a property to its LE and the technology of the LE: fast connections need a property close to an LE, and for the LE to have fast hardware. All else equal, properties at such favourable locations will be more attractive and, as a result, will sell at higher prices. The value of a decent internet connection can therefore be inferred from a comparison of property prices across locations, controlling for other factors.

Econometrically, there are two challenges with this approach. Firstly, there will always be some factors that shift property values and are unobservable in the data. Secondly, neighbourhood-level changes can lead ISPs to upgrade their LEs and at the same time cause house prices to increase. Our identification strategy addresses both concerns. Our most restrictive empirical models identify the broadband premium from changes in broadband speed and house prices over time and across LE boundaries. We compare properties that are located within a couple of hundred meters, but within different LE catchment areas – see figure. Within such a small range it is unlikely that distinct changes in speed that result from different upgrades in the two different LEs will be confounded with other changes in the neighbourhood. 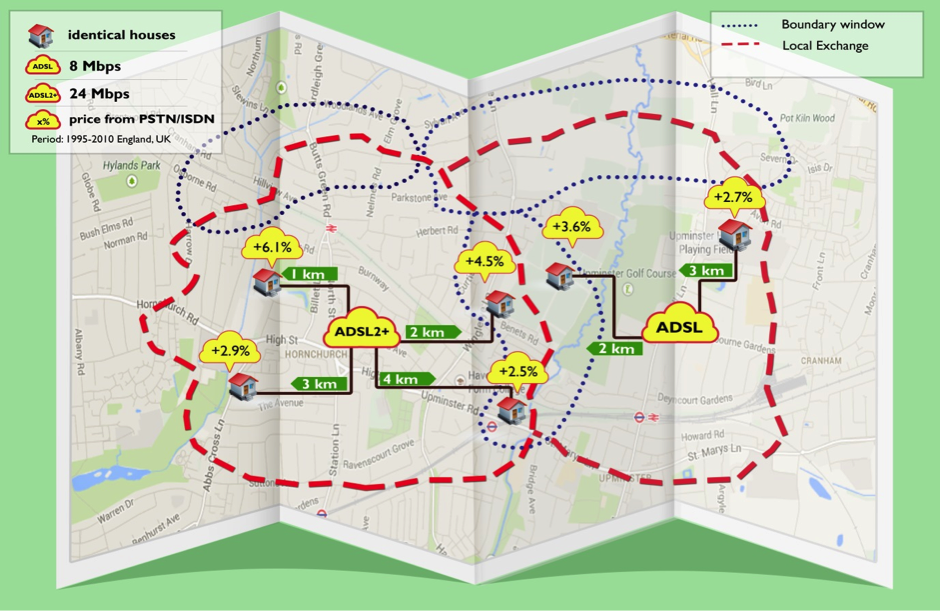 Using this strategy we identify the causal effect of broadband speed on property prices, from about 1m property transactions between 1995 and 2010, and three LE upgrade waves covering around 4000 exchanges.  We find that property prices increase on average by about 3 per cent when internet speed doubles. Importantly, there are diminishing returns to speed. While the increase in value is even greater when starting from slow internet connections, an increase in nominal speed from 8 to 24 megabits per second raises the property value by no more than 1%.

Another main finding is that the consumer surplus differs substantially across regions. It is highest in high income areas that are highly urbanized. As an example, the consumer surplus in London is almost twice as high as in any other of the English regions, reflecting very high usage in the capital city for both work and personal reasons.

We use these estimates to compute the aggregate consumer surplus from taking all UK households on broadband to the 30 mbit/s target envisioned by the EC. Comparing the results to engineering cost estimates, we find that urban areas pass the cost benefit test by a large margin. The opposite is true for rural areas. This is partially because the benefits in these areas are lowest, and partially because the costs are highest.

These results suggest that in rural areas it makes more sense for governments to adopt less expensive fixed and mobile technologies that deliver decent and reliable speed. For urban areas, super-fast broadband is an economically viable technology. An equity issue arises, however, if all taxpayers pay for a subsidized rollout, but landlords in the targeted areas accumulate a large fraction of the benefits. A levy on landlords could help promoting the rollout of fibre while at the same time saving taxpayers’ money and reducing inequalities.