What does daylight-saving time actually save?

On Sunday Britain turned the clocks forward an hour - and summer time officially began. Mornings will be darker, evenings lighter. BST and other daylight-saving schemes are thought to reduce demand for energy (lighting in particular). But do they?

It turns out we know very little about the real effects of ‘time shifting’. This is because most research that looks at daylight-saving, or time zones more generally, involves speculating what kind of effects could occur if we changed the policy – rather than taking actual measurements to quantify real impacts.

A few researchers have tried to measure actual effects, mainly by focusing on what happens a few days before or after a time change. Two recent studies looked at daylight-saving time changes in the US state of Indiana (energy use went up) and in Australia (no effect). There also is some evidence regarding a reduction in road accidents and some (contested) work that looks at stock market fluctuations.

In my current research on time-shifting and energy consumption, I make use of the fact that the United States spans multiple time zones, and that time-shifting arrangements also vary across space. I calculate the solar times of sunrise and sunset across the US, then combine this with information on different time zones and daylight-saving regimes. 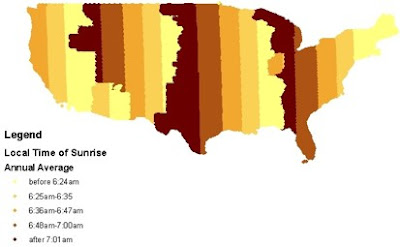 Putting this into a map, we can see how the annual average times of sunrise vary over space. Moving from the East to the West, places get daylight later until we hit a time zone boundary. (Irregularities are because of time zone boundaries, or because particular states had different daylight-saving policies in the early 2000s). I can then identify communities with, say, different solar time, but the same ‘official’ time or daylight-saving policies.

So how does all this shape energy consumption? I first look at US counties in the same time zone. I compare energy use in Western and Eastern areas of the zone – both have the same ‘official’ day but the latter get the sun earlier. Next, I compare counties on each side of a time zone border. Here, ‘solar’ time is the same but ‘official’ days differ because of policy factors.

Comparing the North and the South of the US, I find that:

I am still trying to get my head around what might be causing these patterns. In the South I think it’s higher electricity consumption for cooling that is not offset by lower demand in the evenings. For the North I’m less clear. The policy implications are potentially profound, however - for example, if we’re interested in reducing energy use, perhaps the American North and South should each have their own time zones, or their own time-shifting policies.

As academics say, this is work in progress. Comments are welcome!