This is an updated version, originally posted on here on EUROPP.

Brexit means that UK regions would no longer be entitled to receive EU Structural Funds. Have EU funds been effective, and what might be the consequences of an interruption of EU financial support to British regions?

Shaded areas: less developed regions
In order to single out the effects of the EU funds in the two regions, 1992-2014 regional trends of unemployment in Cornwall and South Yorkshire are compared to those of ‘counterfactual regions’ being similar in all characteristics to Cornwall or South Yorkshire except for not having being eligible to obtain the same proportion of EU Structural Funds.

The results provide clear evidence of a significant impact of EU grants in reducing unemployment. Over the fifteen analysed years in which Cornwall has been in receipt of EU funds, the proportion of unemployed people has been consistently and significantly lower than in the counterfactual comparison. In Cornwall unemployment has declined by 30 percent more than the counterfactual region. The empirical analysis makes sure that this effect is driven by EU funds and not by other potentially confounding policies. 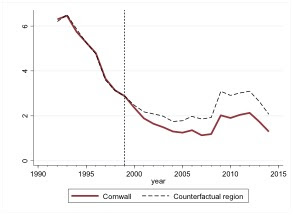 Unlike Cornwall, South Yorkshire has been categorised as a ‘less developed region’ only for seven years. Its improved economic conditions relative to the EU average entailed that in 2006 the region lost the status of area in highest need of help and the proportion of available grants reduced substantially.

Has this change in eligibility affected the region? The evidence unveils that all the labour market improvements achieved in the period of highest financial support – certified by a lower unemployment relative to the counterfactual during 2000-2006 – are completely offset when eligibility for EU grants as ‘less developed region’ is lost. As shown in the figure below, after 2006 South Yorkshire’s unemployment trend gradually went back to the one it would have had in absence of EU funds. 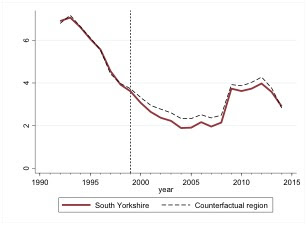 The study also indicates that the per capita GDP in the two regions follows similar trajectories to those observed for unemployment. Both regions converge to higher levels of income while being considered ‘less developed’ by the EU, however this trend is reverted in South Yorkshire when its GDP overcomes the 75 threshold and the region can no longer benefit from the highest form of EU aid.

Hence, while EU funds can have a positive impact on the creation of jobs and the promotion of regional economic growth, these outcomes may not be persistent and long-lasting, rather they may quickly disappear after the end of the high-intensity funding period.

These findings should foster a careful reflection over the future of poorer UK regions in the event of an imminent exit of the country from the EU. Losing the possibility to access EU Structural Funds is likely to expose the economy of less developed UK regions to potential adverse effects. A region like Cornwall, which has benefitted from EU regional development policies for a long period of time, faces the highest risks. In this sense, the experience of South Yorkshire may represent a valuable lesson; losing eligibility for the highest form of EU financial support can produce a short-term shock, and the labour market and economy can continue to struggle in the medium-term.

While European regions losing the status of ‘less developed’ are always entitled to receive a form of transitional funding from the EU, Cornwall would not be eligible for this stream of funding in case of Brexit. Hence, the loss of EU subsidies may be more likely to produce negative consequences on its economy if the UK national Government does not put in place any compensatory policy supporting its transition in funding environment. These potential repercussions apply not only to Cornwall but also to all economically disadvantaged regions dependent on EU aid, such as West Wales and The Valleys, the other UK ‘less developed region’ at the time of the Brexit vote.

References
Di Cataldo, M. (2017). The impact of EU Objective 1 funds on regional development: Evidence from the UK and the prospect of Brexit, Journal of Regional Science, forthcoming. DOI: 10.1111/jors.12337

Airports and Economic Performance in China

Airport construction or expansion is often proposed as a policy lever to boost cities, regions and national economies worldwide – although this case is not clear cut as some well publicized ‘white elephants’ and the recent debate over expansion of London’s airports testify. But it is in large developing countries with poor road and rail infrastructure that air transport might offer the greatest potential benefits, providing a way to bridge large distances at relatively low fixed initial costs. In these settings, airports are often built and expanded with the explicit aim of improving connections to peripheral areas, stimulating economic activity in these areas and reducing inter-area disparities (World Bank 2013). However, despite this policy enthusiasm there is relatively little solid evidence that the opening of airports and expansion of airport capacity really stimulates economic development, and none in the context of developing countries.


In our recent study (Gibbons and Wu, 2017) , we provide new evidence to answer this question, focusing on the rapid expansion of the airport network in China over the first decade of this century. China provides an ideal setting for this investigation, with around 60 new civil airports opening over the decade accompanied by a massive expansion in air transportation (See Fig 1). Passenger numbers in China increased by around 13% per year after 2006, with 14% per year growth in domestic travel, many times faster than major developed economies. Air freight has also grown rapidly, with an 8-9% per year growth in freight tonne-kilometres. In our analysis, we link information on the opening of airports – mainly small regional airports – to firm level data on manufacturing firms and to county-level administrative data on other economic indicators. Using these data we estimate to what extent improvements in accessibility from these airport openings lead to higher productivity and GDP.
Figure 1: Airports in China up to 2009 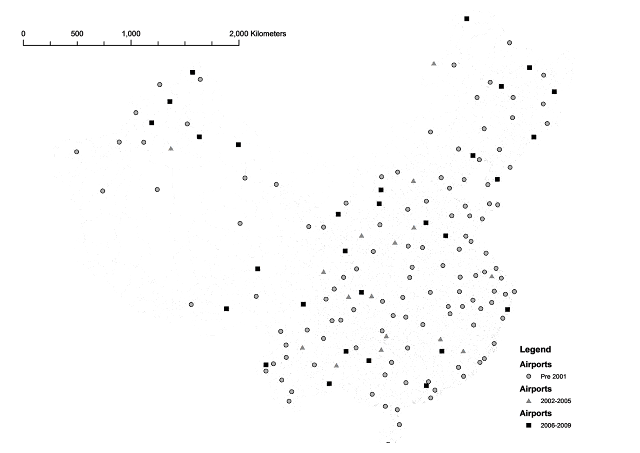 Our key finding is that implied travel time reductions and consequent improvements in access to domestic markets boosted industrial productivity and GDP in areas affected by the opening of new airports. The effects are substantial, with a 10% increase in access stimulating industrial output by around 2.5%. Most of this impact comes from the fact that a new airport reduces land-side journey times for places nearby, highlighting the obvious but overlooked fact that the accessibility of airports on the land side is the key factor that should guide airport location decisions. These gains in the industrial sector are presumably attributable to cost reductions in business travel and air freight transport and associated ‘agglomeration’ economies, but we lack data to confirm the exact channels.

The productivity impacts are more pronounced in privately owned firms in high population, lower educated counties. We find no effects on employment or wages, but some effects on fixed asset investment, hinting that these productivity changes have largely benefited capital owners. We do not find any clear effects in the service sector, which runs counter to common assumptions and evidence about the role of air transport in business dealings in finance and other services in developed countries (Sheard 2014, Airports Commission 2015).

An important feature of our research design is that we focus on the implied travel time reductions and the way these change population accessibility – using an index defined by the population that can be reached per unit of time. This index provides a proxy for access to markets of various types (labour markets, product markets, intermediate inputs, other businesses). The very large changes in accessibility by air generated by new airports in China are illustrated in Fig 2, for the 2006-2009 period (the scale of the changes is such that 0.10 means a 10% change).
Figure 2: Population accessibility changes due to airport construction 2006-2009 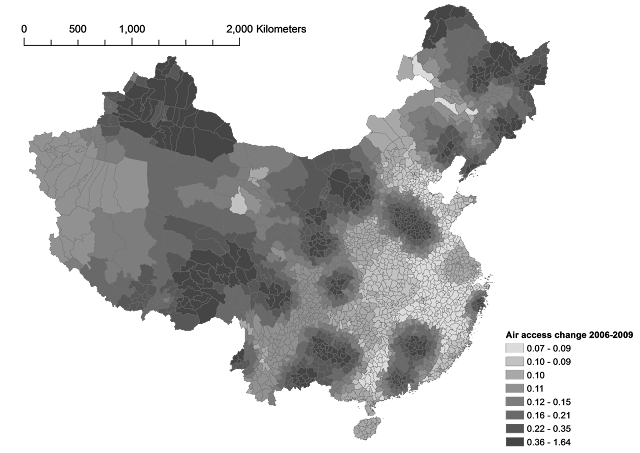 When it comes to estimation, we drill down specifically to the impacts on firms in counties which are some way from a new airport, but ‘incidentally’ experience travel time reductions because the new airport is closer than their previous nearest. This aspect of the design brings various advantages. It means that we are comparing places experiencing large access improvements with similar neighbouring places experiencing smaller or zero access changes. It reduces the risks of us finding correlations between airports and economic performance that come about because new airports have been targeted at growing or declining places. It also means we can infer the productivity benefits of the travel time reductions, rather than changes in local economic activity directly generated by airport operations. All previous research on airports has looked at the combined effects of the local economic activity created by operating an airport and any impacts coming about through travel time and trade cost reductions. Doing so can be misleading, because much of the employment associated with airport operations should properly be considered in terms of the opportunity cost, not as an economic benefit – despite the common policy rhetoric of ‘job creation’ from this type of infrastructure investment.

Based on this evidence, airport construction policy in China has been successful in boosting local growth in the manufacturing sector. Extrapolating our estimates to the national level, the 35% increase in market access generated by airport network expansion over our study period implies an 8% increase in industrial output. The overall gain in industrial output in this period was 210%, so airports could explain a small but non-trivial proportion of aggregate growth. Some of the increases we observe may represent displacement and sorting of activity between high and low access places, although our estimates are based on within-industry changes, are conditional on employment and capital inputs, and we see no corresponding changes in employment. These facts suggest that our findings are more likely attributable to firm-level productivity improvements.

Generalising these findings to other contexts is always risky and it would be very bold to claim similar gains from expanding Heathrow! We have also said nothing about the environmental costs. But air transport infrastructure clearly has an important part to play in large rapidly developing economies, such as China, where distances are vast and manufacturing plays a dominant role.

Stephen Gibbons is a Professor of Economic Geography at the London School of Economics and Political Science (LSE), and the Director of Spatial Economics Research Center  and Centre for Economic Performance Urban and Spatial Programme